Imereti and Racha-Lechkhumi and Kvemo Svaneti

– Establishment of the Siting Advisory Committee

Based on the findings of the focus group meetings, the SAC had to make the final decision on the most preferred location for the new regional non-hazardous waste landfill.

The result: The site nearby village Mukhiani was selected as the most preferable. Please find detailed information on the discussion and the process here.

This information was recorded and summarised in a report, which can be downloaded from here.

In June 2021 the SWMCG continues the site selection process and applies a new approach with the consent of donor organizations (KfW, EU), which foresees the involvement of citizens in the decision about the final site location for the new regional non-hazardous waste landfill.

Therefore, the Regional Working Group for Waste Management for Imereti,  Racha-Lechkhumi, and Kvemo Svaneti was established and had its first meeting on 16 June 2021. The regional group is chaired by a representative of the regional Governor’s Office and the Georgian Solid Waste Management Company and includes representatives of municipalities, NGOs, and local initiative groups.

In May 2020 the IC consultant (ERM) finalized the Site Selection Report. The scope of this report was to identify possible site locations for a new regional non-hazardous waste landfill. The search area was defined as a circle with a radius of 25 km around Kutaisi as the highest amount of waste is produced there. 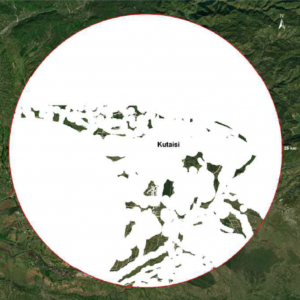 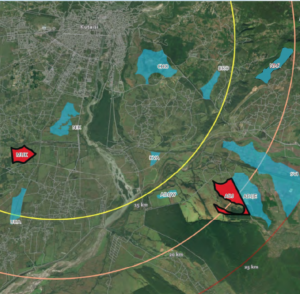 After excluding all non-suited areas, the map is inverted and it becomes visible, that very few locations have remained. Now further research is made (for example minimum 18 ha size of the area). The resulting “long list” (blue areas) is then further analyzed and then ranked. The two top priority ranked locations have been  identi­fied: Mukhiani and Adjameti (the red areas). NO FINAL DECISION HAS BEEN MADE AT THIS POINT!